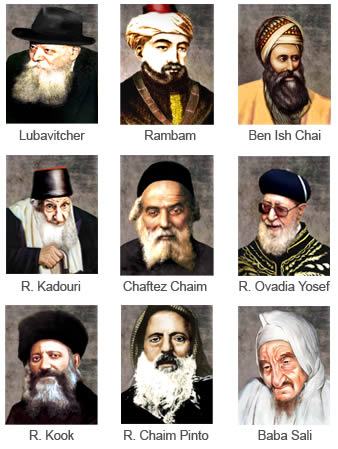 NOTE: WE ARE NOT SHIPPING NOW BECAUSE OF THE CORONA VIRUS CRISIS 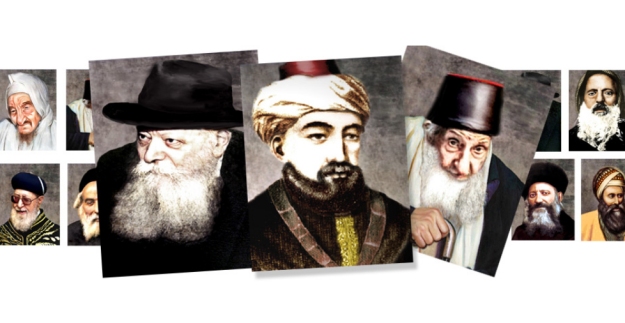 The Lubavitcher Rebbe
Menachem Mendel Schneerson (April 5, 1902 – June 12, 1994), known as the Lubavitcher Rebbe or just the Rebbe among his followers, was a prominent Hasidic rabbi who was the seventh and last Rebbe (Hasidic leader) of the Chabad-Lubavitch movement. He was fifth in a direct paternal line to the third Chabad-Lubavitch Rebbe, Menachem Mendel Schneersohn.

Rambam
Moses ben-Maimon, called Maimonides and also known as Rambam (Hebrew acronym for “Rabbi Moshe ben Maimon”), was a preeminent medieval Jewish philosopher and one of the greatest Torah scholars and physicians of the Middle Ages. He was born in Cordoba, Spain on Passover Eve, 1135, and died in Egypt (or Tiberias) on 20th Tevet, December 12, 1204. He was a rabbi, physician and philosopher in Morocco and Egypt.

Ben Ish Chai
Yosef Chaim or in Iraqi Hebrew Yoseph Hayyim (1 September 1832 – 30 August 1909) was a leading Hakham or sage (Sephardic Rabbi), authority on Jewish law (Halakha) and Master Kabbalist. He is best known as author of the work on Halakha Ben Ish Hai (“Son of Man who Lives”), by which title he is also known.

R’ Yitzchak Kaduri
Yitzchak Kaduri, also spelled Kadouri and Kadourie (died January 28 2006),was a renowned Mizrahi Haredi rabbi and kabbalist who devoted his life to Torah study and prayer on behalf of the Jewish people. He taught and practiced the kavanot of the Rashash. His blessings and amulets were also widely sought to cure people of illnesses and infertility. He has not published any religious articles or books. At the time of his death, estimates of his age ranged from 106 to 110.

The Chofetz Chaim
Yisrael Meir (Kagan) Poupko (Dzyatlava, 1838 – Radun’, 1933), known popularly as The Chofetz Chaim, was an influential Eastern European rabbi, Halakhist, posek, and ethicist whose works continue to be widely influential in Jewish life. His surname, Poupko, is not widely known.

R’ Ovadia Yosef
R’ Ovadia Yosef (born September 23, 1920) is an Iraqi-born former Sephardi Chief Rabbi of Israel, a recognized Talmudic scholar and foremost halakhic authority. His halakhic responsa are highly regarded within Orthodox circles and are considered binding in many Mizrahi communities, among whom he is regarded as “the most important living halachic authority.”

R’ Abraham Isaac Kook
Abraham Isaac Kook (1865–1935) was the first Ashkenazi chief rabbi of the British Mandate for Palestine, the founder of the Religious Zionist Yeshiva Merkaz HaRav, Jewish thinker, Halachist, Kabbalist and a renowned Torah scholar. He is known as HaRav Avraham Yitzchak HaCohen Kook, and by the acronym (HaRaAYaH) which in English means “evidence”, or simply as “HaRav.” He was one of the most celebrated and influential rabbis of the 20th century.

Rabbi Haim Pinto
Rabbi Haim Pinto (1748–1845) was the leading rabbi in the seaport city of Essaouira, Morocco, known in his lifetime as Mogador, Morocco. Rabbi Pinto, himself born into a distinguished rabbinic family, had four sons, Rabbi Yehouda also known as Rabbi Haddan, Rabbi Yossef, Rabbi Yehoshiya and Rabbi Yaacov. Annually, on the anniversary of Rabbi Pinto’s death, ( 26 Elloul 5605, in the Jewish calendar) Jews from around the world come on pilgrimage to pay at the rabbi’s grave in the Jewish Cemetery of Essaouira.

The Baba Sali
Rabbi Yisrael Abuhatzeira, known as the Baba Sali (lit. “Praying Father”) (1890–1984) was a leading Moroccan Sephardic rabbi and kabbalist who was renowned for his ability to work miracles through his prayers. He was one of the leaders of the Aliyah of Moroccan Jewry to Israel, which saw the transfer of nearly the entire population of that community to the Holy Land. His burial place in Netivot, Israel has become a famous site for prayers and petitioners.